Anatomy of an Instant Road Trip

I found out when I came to work on Monday that I was going to have three days off in the middle of the week. So when I got home Monday afternoon, I immediately embarked upon a whirlwind of last-minute preparations. I did two loads of laundry and did my best to get organized and packed for the jaunt. I took a shower and loaded all my gear and supplies into Pancho so that I could wake up and hit the road. When I retired for the night it was about 1 A.M.

My alarm went off at 4. I sprang out of bed, got dressed, climbed into the saddle and started the engine. I was on the road by 4:15. I followed an intricate maze of two-lane backcountry highways to get from Geneva to I-75. By the time the sun came up I was halfway to the Georgia border.

The ride up to Suches was smooth and uneventful. I arrived at Two Wheels Only sometime in the afternoon -- I had quit paying attention to the clock by then. The last part of the ride was the best, as always. Gerogia's highway 60 is one of many beautiful and exciting stretches of pavement you'll find in the north central part of the state. It's no coincidence that T.W.O. was located there. I put down the side stand, unpacked, had a couple of beers, engaged in brief conversation with a couple of other riders and then went to bed and slept for 13 straight hours. :) 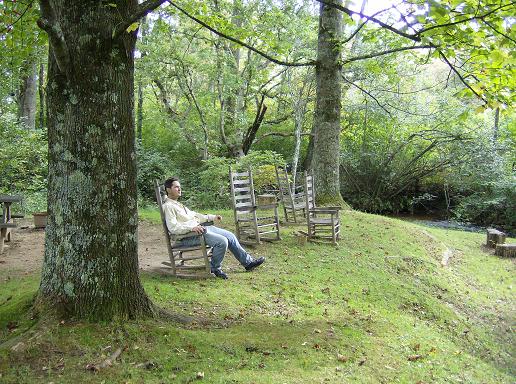 Relaxing in a rocking chair next to a bend in the creek.

ABOVE, ON THE LEFT: The front porch of the amazing, wonderful (but now sadly long gone) Two Wheels Only motorcycle resort, the perfect place to sit and rest after putting a few hundred mountain miles under your tires. ABOVE, IN THE MIDDLE: Welcome home, riders! ABOVE, ON THE RIGHT: The guest house at sunrise with Pancho parked out front. This was definitely my favorite place to stay while on the road on two wheels.

Inside the main lodge at Two Wheels Only. What a place it was! It will be missed. 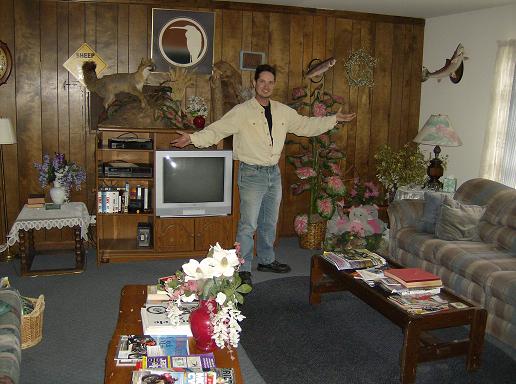 The common area in the upstairs lodge. 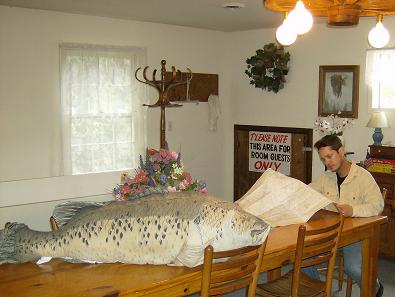 Planning tomorrow's route with the help of a great big fish. 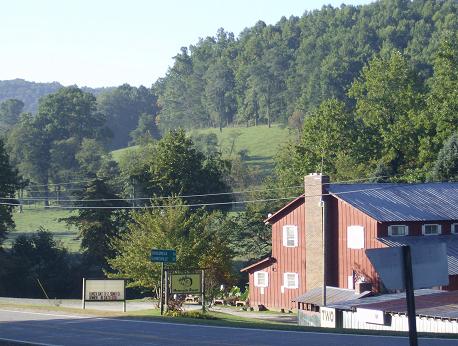 Two Wheels Only at dawn. 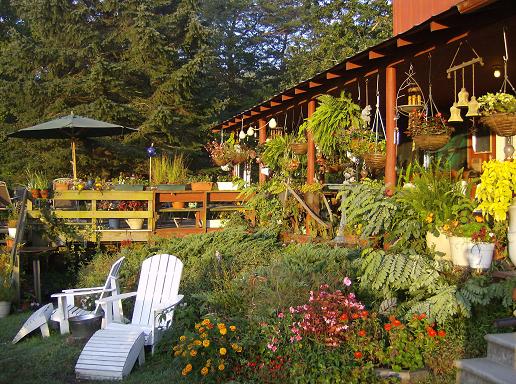 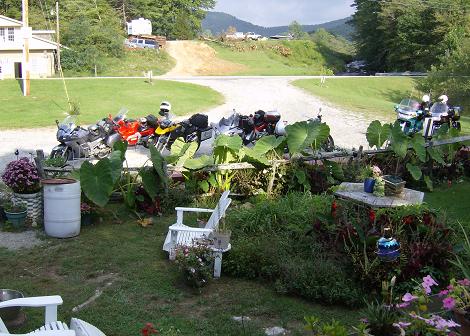 Bikes in the parking lot. 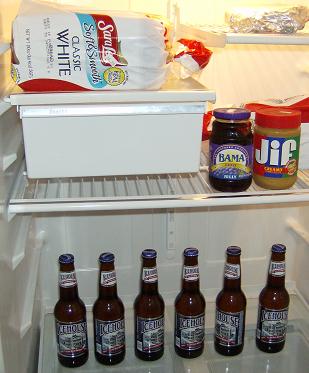 This is the lodge refrigerator, where the guest riders can keep their food while they are staying. Notice that it contains all the four food groups: 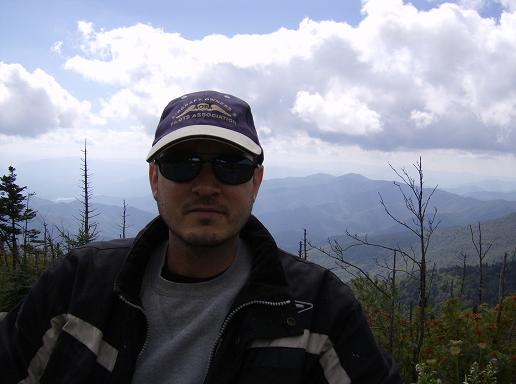 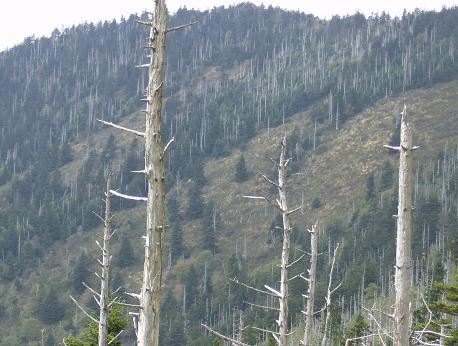 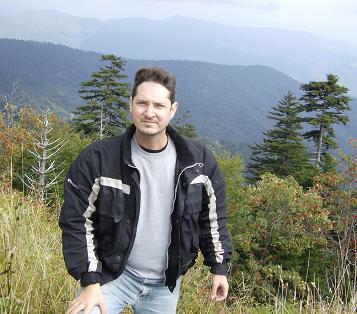 I had a wonderful time riding through the Smokies on Wednesday. The weather was perfect -- cool and dry. Up at the higher elevations there was some mist and the skies were overcast, but down in the valleys it was clear and sunny. The views, as you can see above, were splendid. I didn't get a single drop of rain for the whole three-day trip. Being up there during the middle of the week meant I had many of the roads almost completely to myself, even the scenic rural twisties that are typically infested with motorcyclists on weekends when the weather is nice. 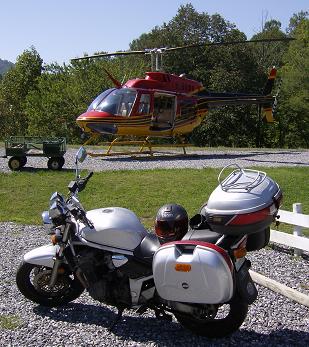 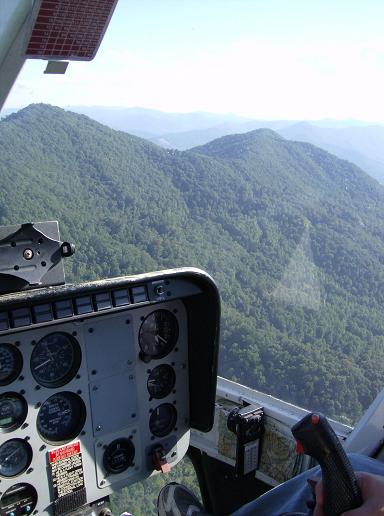 I saw this Jet Ranger parked by the side of the road and of course I had to stop and take a ride. The view of the mountains from a helicopter is incomparable. My pilot, Brian, had flown in the Army and was comfortable getting down low and close. He gave me a great aerial tour of some of the local peaks.

One of the semi-feral cats who live around T.W.O. recently had a litter of nine kittens. Three had already found homes, but the remaining six were still hanging around. They were about five weeks old. Of course I had to take a few pictures of them before I left. 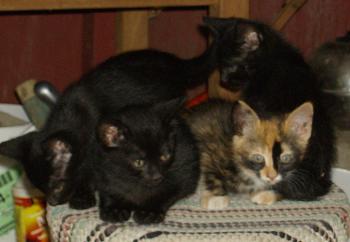 They seemed to enjoy piling up on top of this stool. It was their favorite perch.

Several times I found four or five of them up there, napping in a little furry heap of brothers and sisters. 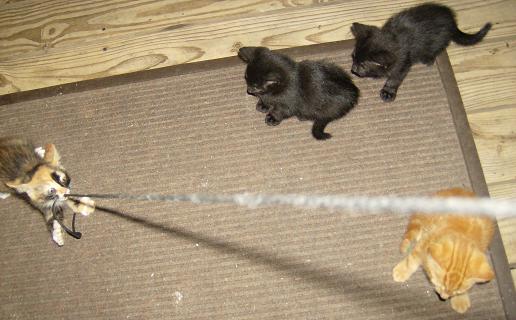 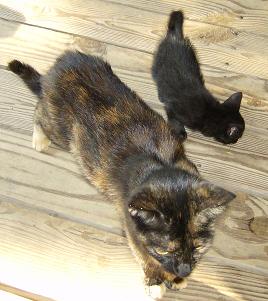 Momma with one of her kittens. 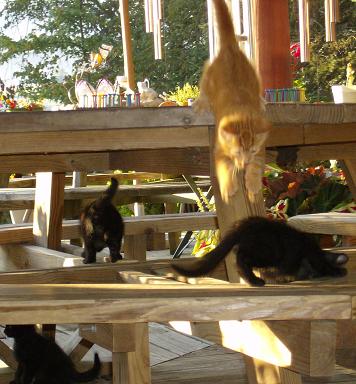 Among the kittens' favorite activities was leaping up onto this picnic table -- and then leaping back down again.

Overall, they had about a 50% success rate going in either direction. 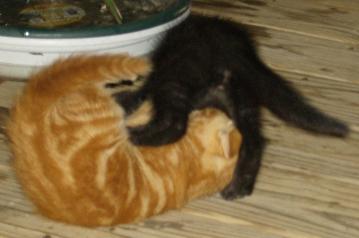 Wrestling was another favorite pasttime. 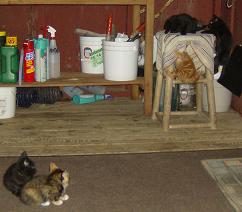 The three kittens at the upper right show great determination in their epic struggle to reach the summit of Mount Stool.

Meanwhile, The two kittens at the lower left watch from a safe distance. 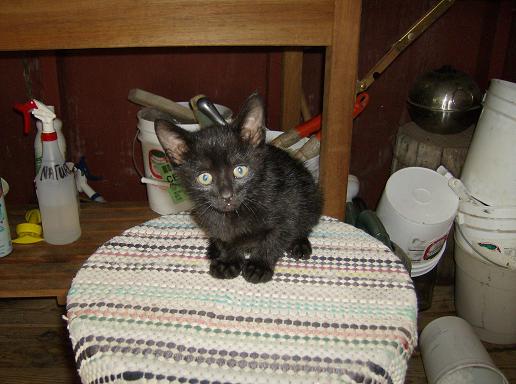 All together now: "awwwwwwww!" 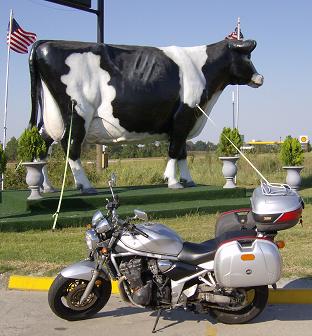 On the way home, I felt compelled to stop and take a picture of Pancho parked in front of this giant fiberglass cow next to I-75.

Feel free to write your own caption.

Click HERE to return to the Travel index page.